A Coffee Pilgrimage to Room 43a of the British Museum 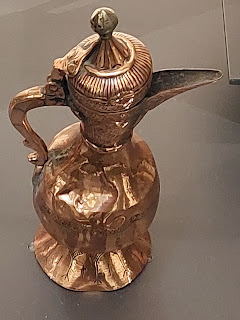 Love is like the coffee of the Bedouin, bitter yet beautiful. - Arab saying

e think we like coffee, that we have a coffee culture — really?  A cappuccino in a plasticized paper cup or any later than breakfast time is an abomination.  Even worse is the “Latte”, a child’s drink of warm milk with a memory of coffee.  It is a sort of homeopathic version of coffee.  What we want is the strong, aromatic coffee of Islam.

Come with me on a pilgrimage to the Levant and , where Sufis, Bedouin and Ottomans have perfected and celebrated the art of coffee since the 1300s.  Travel is still a bit tricky but we can do all this in Room 43a of the where a free exhibition “Life in a Cup. Coffee Culture in the Islamic world” is on until 18 September 2022.  The exhibition is small but intense, rather as coffee should be.   British Museum

Sufis in the in the late 1300s discovered coffee’s properties. Coffee warded off sleep and enhanced their mystical experience. Coffee reached by the early 1500s.  There, the preparation and consumption of coffee became an art form.  The exhibition introduces us to the Sultan’s coffee maker, not a Nespresso machine but an elegant person in a rose-pink silk robe and turban.  The Cavehdgi Bachi presents a tray of coffee covered with an embroidered coffee-cosy.  Levantine coffee drinkers dismiss a coffee with no foam as of poor quality and look down on the skills of the coffee maker.  I doubt if the Cavehdgi Bachi ever took the risk of presenting the Sultan with a poorly foamed coffee. 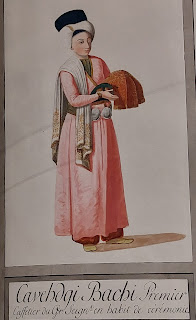 By the 1600s, people from to were drinking coffee.  In the courts and mansions of , drinking coffee was a refined activity as we can see from the lustre porcelain cups they used.  The exquisite patterns would have emerged to delight the eye as people sipped their coffee. Some of the porcelain was imported from and along the trading routes.  In rural , they used more humble earthenware cups that have their own beauty.  We can tell they were cherished from the lovingly woven baskets they used to carry them. 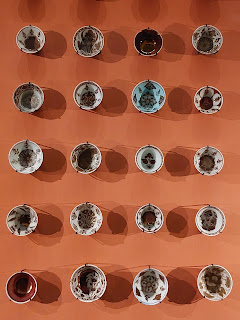 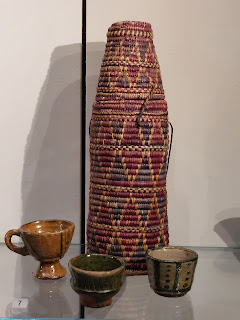 Sir David Wilkie, who travelled in , , and in the 1840s, was a keen observer of the coffee culture.  He came to realise that what he thought was time wasting (he must have been amazed at how long the five or six sips in a Turkish coffee cup can be made to last) was time spent building social relationships. 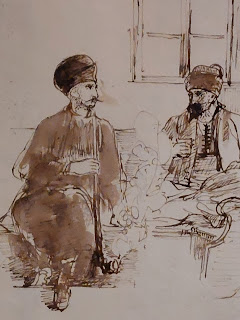 Postcards in the exhibition show that women enjoyed coffee too but I have the impression that men and women did not drink coffee together. Some years ago, I was travelling in the with my wife, Adrienne. We went into a small coffee shop in the oasis town of .  I sensed a tension as soon as I ordered. I had not noticed that only men were present.  The presence of a woman unsettled them though Arab hospitality prevailed. There were no such worries when we went to the Al Nofara coffee shop in the al-Hamidiyeh Souk in to listen to Abu Sadi tell his stories.  In modern , the sexes, the young and the old mixed happily. I have written about that experience in another post. The Story Teller of Damascus

Coffee is a sensory pleasure.  The Egyptians and Syrians say that tobacco without coffee is like a Sultan without his fur coat. All fur coat and no baccy?

Coffee reached in 1652 with the celebrated Pasqua Rosée, who founded the Capital’s first coffee shop. Its successors would go on to be the seedbeds of the Enlightenment.  People like coffee shops and enjoy conversations.  Even as early as 16th Century the authorities in , followed by and , tried to ban coffee shops.  They failed of course; the people and commerce prevailed.  In , by the late 1800s, coffee shops became places where families could enjoy shadow puppets performances and, as I had done in , story telling.

The European powers took hold of coffee, set up plantations in , and elsewhere.  Coffee became a global commodity.  and, from there, developed their own methods of brewing and consuming coffee.  The new coffee culture spread back to its heartland.  There are 47 Starbucks outlets in .  They do serve Turkish coffee but you will do very much better in any street café, where you will enjoy not just the coffee but also the experience of an ancient tradition.

Enjoy this quiet exhibition at the British Museum.

To Bath for my Handwriting 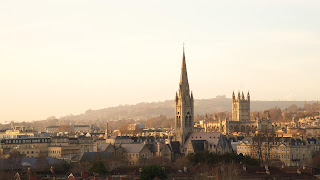 I like to write my travel journal by hand in a paper notebook with a fountain pen.  Quite simply it is a more sensory and thoughtful process.  A problem has been creeping up on me.  My handwriting has grown worse over time and now, even I cannot read what I have written.

And so it was that Adrienne and I set off for a few days in Bath so that I could learn to write. I spent two and a half hours on a Saturday morning learning calligraphy from a master of the art, Athena Cauley-Yu, in her blissful stationery shop and print works on Walcot Street — “Meticulous Ink”.  With just a few minutes explanation she got six of us writing our ABC.  We worked through the alphabet from A to Z.  This was learning by doing, the best sort of learning. It was hard at my age to learn new motor skills.  During Lockdown, I had tried Arab calligraphy by way of a British Library online workshop.  Now that is hard and I was really bad at it.

Under Athena’s expert instruction, I could see improvement.  I can just remember some impressions from first learning to write as a child and these came flooding back.

The process was slow, deliberate and meditative.  A well-formed letter was a reward and the iron gall black ink provided oxidised on the paper to a rich charcoal.

I found some letters particularly difficult.  If I am to write in Copperplate, I shall have to avoid words with the letters M and K, which still defeat me.  When we got to the letter O, I announced that my o’s looked more like a row of penguins.  The class agreed with me, which was less than kind.

Athena is a self-confessed stationery geek; so am I. Her shop is a temptation and I stocked up.

Walcot Street and London Road are promoted as Bath’s Artisan and Artists quarter.  This is a bit of an over-statement.  For knitters there is “The Yarn Story” an excellent shop for knitters but I fear other artisan business may not have survived Covid and lockdown.  I did, however enjoy a very good espresso at Taylor’s Bagels and Coffee close to Meticulous Ink.

We were in Bath for a few days and we have visited before so I have nothing to say about the must-see attractions for the first time visitor.  I did revisit Bath Abbey to pay my respects to King Edgar whose coronation as the first King of England in 973 is commemorated in stained glass.  Parts of the rite were still in use in 1953 at the Coronation of Queen Elizabeth II.  The Abbey floor is made up of gravestones laid flat.  I learnt that they are called ledgerstones.  I do like learning a new word.

The Museum of East Asian Art was new to us and well worth going to see.  The exquisite collection, mostly of ceramics and porcelain, is based on the private collection of Brian McElney who combined a career as a lawyer in Hong Kong with scouring the markets and antique shops of Hong King to find treasure.  Oriental porcelain has been appreciated in Europe since the Middle Ages when the Silk Road trade brought it west.  Glass from Venice travelled east in exchange but did not catch on in the countries of the masters of ceramics.

Bath has two rather wonderful bookshops, to which I made a pilgrimage.  Topping & Co has moved since I was last in Bath.  It is now splendidly housed in the former Friends Meeting House in York Street, close to the Abbey.  I went up the grand steps, through a vast portico into a space with bookshelves from floor to ceiling. And the ceilings were high.  Ladders on bookshelves are always a good sign. The staff were friendly and efficient in this temple to books.

Mr B’s Emporium in John Street is different.  It is rabbit warren of spaces for booklovers.  Its spaces have names.  The Imaginarium is for writers; the Bibliotherapy room is for travellers.  The space for children “The Wood between the Words” is enchanting. Do not miss Mr B’s.

Finally a handful of recommendations from our visit.  We stayed at the Apex City Centre Bath. It was fine but they required us to book a time for breakfast in advance, which I found irritating.  We breakfasted very well indeed at The Boston Tea Party on Kingsmead Square.

We dined very well at Martini Restaurant in George Street.  It is a traditional Italian Restaurant run by Italians and it had a family-run feel to it.

On our second evening, we pushed the boat out and dined magnificently at Portofino Oyster Bar and Fish restaurant on the High Street.

It felt good to be travelling together again.

Posted by David Higham at 10:10 No comments: