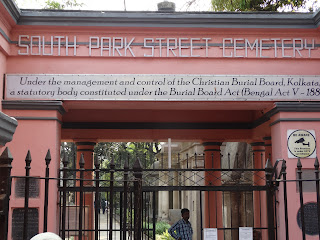 South in Kolkata is an English cemetery and I could see plenty of those at home. I almost didn’t bother to go. I am glad I did or I would have missed seeing the splendid tomb of Major General Charles Stuart, better known as ‘Hindoo Stuart’.

has been renamed. The pink stone entrance now leads off raucous (that’s the street that’s raucous, not the nun) into a quiet and dilapidated graveyard romantically overrun by fig and palm trees. It looks and feels nothing like an English cemetery. It is oriental and exotic. The cemetery was opened in 1767 fell out of use by 1790. The English people buried here belonged not to the Raj but to the East India Company. They preceded the Victorians and their memorials are more in sympathy with Mughal and Hindu cultures than with imperial . 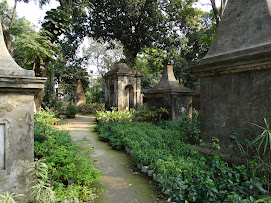 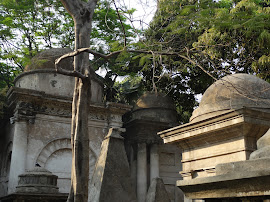 The monuments were huge compared with English gravestones. I could not place the style. There were miniature Greek temples, columns, arches, obelisks, domes and cupolas. Some of the obelisks were pyramid-shaped, others conical and carved in spirals. There was a Greek classical influence and it did not feel the least bit Christian. I should have thought myself in a Mughal burial ground. I learned later that the tombs are a mixture of Gothic and Indo-Saracenic style. Some of the carvings show a Hindu influence. It was a strange and wonderful place of calm surrounded by the hectic rush of modern Kolkata. Indeed, the cemetery is only a remnant of a much larger plot that has been built over. Taxis, buses and bicycles now stream over the forgotten remains of the men and women of the East India Company.

I met three young men, all technical students from the city.  They knew little of the cemetery’s history and its British connection but they were grateful to find a place of peace and calm.

I walked around this marvel reading the inscriptions. The people here died young. Many of the men died in their forties. There were enormous monuments to young women. A huge pyramid shaped obelisk marks the grave of Elizabeth Barwell, who died in 1778 aged 23. Rose Aylmer lies, dead at 20, under a vast inverted ice cream cone of a tomb. It was said that the life expectancy of a European in in the 18th century was two monsoons. Many of the young women died in childbirth and the men, if not of disease, in war or accident. The people buried here were not fainthearted.

I saw very few crucifixes. Biblical references were rare. Rather, the epitaphs celebrated people’s civic and secular virtues.  The Honorable (sic) John Hyde; a Puisne Judge of the Supreme Court died aged 59 in 1796.  He was, I read, ‘a firm and zealous friend’. His hospitality had been enjoyed a wide extended circle. ‘His advice, protection and munificence to unfortunate persons were his noblest eulogium’. It went on at some length; it was a big memorial. It ended eventually with a tribute to the generosity of his mind.

Beating the odds of an early death, Major General Charles (Hindoo) Stuart served in for 50 years. He wore Indian clothes off duty, became a Hindu and bathed in the each day. He attempted to persuade the British ladies of , the memsahibs, to discard their whalebone corsets and iron skirt hoops and take to wearing the sari. Did he have in mind their comfort, respect for local culture or more lascivious motives?  The answer is buried with him

The epitaph to Robert Gardiner reports that ‘unfortunately’ he died in the ship Ganges on the Barabuller Sand in the river aged 46 in 1787. The Barabuller Sand lies in wait for ships approaching the river from the . His affectionate son Andrew erected the stone from a ‘motive of filial regard’.

A tattered advertisement informed me that I had missed the first concert ever to be held in the cemetery by a few weeks. I should have liked to have been there.

The Association for the Preservation of Historical Cemeteries in and the British Association for Cemeteries in South Asia care for the , evidently on a shoestring. They publish a guidebook.  The young woman who sold it to me explained that her father was the keeper of the plot.  He was off sick and she was standing in for him.  I was touched that she should take such family pride in looking after this wonderful place. 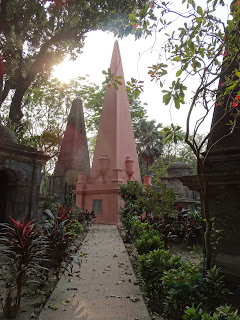