It was a hot, humid Kolkata morning and I had been advised to take a tram.  I decided to walk and within about 500 yards, I was lost. I had a map but there are few street signs in Kolkata.  I soon worked out that many shops have their address on their sign. That was how I got my bearings and found the tramline on Lenin Sarani. I took the tram to . My fare was 5 rupees (about 6p).


is the academic and literary centre of Kolkata. I knew I had arrived because a poster put up by the Kolkata traffic police read ‘Educational area – please maintain silence’. On Kolkata’s raucous and chaotic streets, the poster was a triumph of hope over experience. 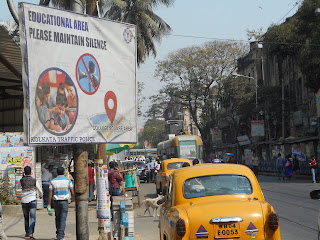 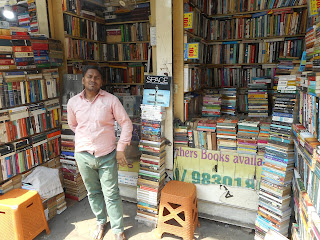 Second-hand bookstores line the street. Most sell academic books written in English. At one stall, I asked for short stories in English, and found myself with a compilation by Sudha Murty called ‘Grandma’s Bag of Stories’. It was a book of cautionary tales in English and I thought my grandson Floyd would enjoy it. There was a bookplate in the front. The Jewish Girls School of Kolkata had awarded the book to a pupil for science in April 2017. I was buying it for 100 rupees (about £1) less than a year later. The ungrateful little madam had already sold her valuable prize. 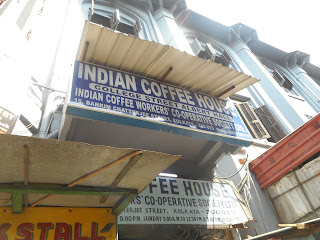 It was hard to find the Indian Coffee House. These coffee houses were set up after as nationalised establishments. They have become an Indian institution. It was everything I hoped it would be. There was a high ceiling. Waiters in clean but scruffy white uniforms and turbans made their way at glacial speed between the tables. Eventually I was able to order a cup of coffee and some hot buttered toast; nothing trendy or modern here. I hoped to see and hear the other Indian institution called ‘Adda’, the art of lively and argumentative conversation. There were tables full of mostly men engaged in lively conversation and I reckoned I had found my goal. I was not invited to join in. A pall of cigarette smoke hung above the tables. At one point, the ceiling fans prevailed over the production of smoke to reveal a sign rendered almost illegible by nicotine stains. The sign read, ‘No smoking allowed. Smoking here is an offence’. 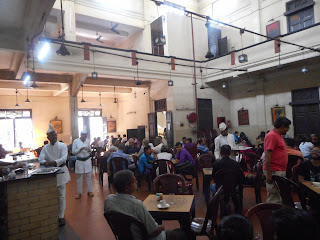 I started to read my copy of The Statesman, which had cost me all of five rupees. The Statesman is venerable English-language newspaper published in Kolkata. To prepare myself for the city I had listened as an audiobook to “The Epic City” by Kushanava Choudhury, formerly a journalist on The Statesman.  So there I was, set up as I like to be, in a foreign city with coffee, my journal and the local newspaper, just absorbing the atmosphere. The Statesman’s masthead told me that it incorporated and was directly descended from ‘The Friend of India’, founded in 1818. 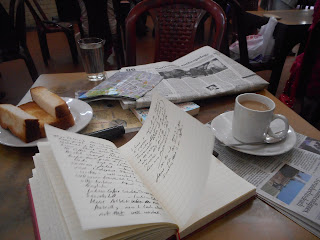 When I had sufficiently imagined myself as some sort of foreign correspondent, I attracted the attention of the waiter for the bill in less than five minutes. Another 10 minutes or so and it came and I paid 37 rupees. My change came on a tray. I then made a terrible faux pas. I took the note and left the coins as a tip. My very tall waiter looked down at me and tipped the tray contemptuously towards me so that the coins fell back into my hand. There was to be no capitalist tipping here in this cathedral of socialism.


My business in was done. It was not so much that I needed to achieve anything there I just wanted the feel of Kolkata. Here, as in many parts of , there is a huge emphasis on education and self-improvement everywhere were advertised courses in English and even commercial English. Perish the thought of a course in commercial English, do they learn phrases like, ‘Let’s run that one up the flagpole’, or ‘Thinking out of the box’?


I found a tram to take me back south along and then right into Lenin Sarani towards Esplanade. This time I was near the front of the tram and could see the driver standing at the controls. They were not complicated. He had a dead man’s handle, which he could push forward to make the tram go. Under his right foot was a metal button on the floor that operated the klaxon. Then I spotted that the street was one-way northbound. The trams however ran both ways. Mine was southbound.  We swung right into Lenin Sarani, I could see ahead of the driver, a phalanx of six yellow Ambassador taxis spread from pavement to pavement with no gaps between them and what seemed like six more ranks behind them. The driver did not hesitate. He drove straight ahead parting the taxis like a zip through yellow fabric. Taxis, cyclists, handcarts and cows constantly impeded the tram’s progress. The driver pushed his dead man’s handle forward and back like a demented fruit machine player while his foot beat a flamenco on the button that operated the klaxon. When all else failed, which was quite often, he yelled in vivid Bengali at recalcitrant pedestrians and cyclists. And so we clattered banged and barged until the road opened out into Esplanade and the tram station


I lost my way back to the hotel again and had to ask. All very humiliating.


Note:  If, like me, you would like to know more about The Indian Coffee Houses, I recommend “The Palaces of Memory”, by Stuart Freedman