Shimla – Not Quite What It Seems

On a cold, wet public holiday in February, Shimla, the former summer capital of the British Raj reveals itself only slowly to the visitor.  It is worth the effort. 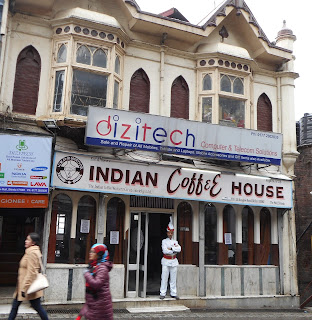 The first place to open its doors was the Indian Coffee House on the splendidly named Mall.  This tarmac street is less impressive than it sounds. Nevertheless, it was on this road that paraded itself and gossiped at Scandal Point.  The place where the daughter of the Viceroy eloped with a Maharajah in 1892.  The Indian Coffee House is one of a chain of nationalised coffee houses set up by the newly independent Indian government in 1947.  Inside white-uniformed and turbaned waiters serve coffee (no chai) and food from a menu that reads much the same as it did in 1947.  The mostly male clientele still practise the art of Adda, lively conversation and argument.  We, the few tourists to venture inside, were ignored though we shared a table with two cheerful Buddhist monks.


Coming out of the Coffee House, we were close to the Gaiety Theatre.  Built in 1887, it is a charming small theatre and remains in use today.  It is home to the Amateur Dramatic Club of Shimla (known as the ADC) established 50 years before the theatre itself in 1837.  It is well worth taking the tour and historical talk.  The theatre is very grand for its size. It even has a Vice-Regal Box.


Upstairs there is a selection of production photographs.  The titles of the plays include The Merry Merchant of Venice and The Adventure of Lady Ursala, suggesting to me that the productions were not all that serious. I imagined they were full of in-jokes and innuendo. I even thought that the ADC might be a hotbed of flirting and more.  In rather an odd way, I found some support for my imaginings. 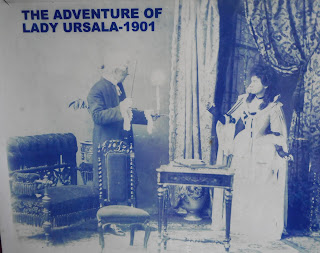 At Shimla’s railway station, waiting for the Himalayan Queen (The Toy Train) to takes us the sixty miles down to Kalka in just five hours, I bought some postcards at the small shop.  The shopkeeper silently pushed a small book in front of me. One glance and I bought it.  It was “Simla in Ragtime” by DOZ.  (Minerva Publishers, 150 rupees (£1.70)).  The anonymous author writes as an American.  It is a slightly naughty, gossipy commentary on life in Shimla in 1913 thinly disguised as a guidebook.  By the standards of the time, it is racy. Of the ADC, he says, ‘No professional company has any chance in Simla, as the local amateurs will not hire out the theatre. The fact is they cannot, because they are always rehearsing and changing the cast and eternally squabbling for leading parts.’ I do not know where else you can find the book but do not visit Shimla without buying it.


From Scandal Point, there is a ramp up to the Ridge, Shimla’s highest point with fine views of the mountains.  Behind , we stopped at the Book Café. The chai and the cakes are good but there is something special about it.  The Himachal Pradesh prison department set it up.  It is run by long-term inmates.  It also runs as a lending library, so if you go there, please take a book to donate.  They will insist that you write your name in the book.  Then settle down with a borrowed book and chai served by a mild looking man who may be a murderer. 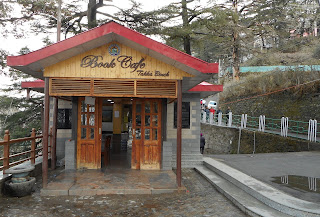 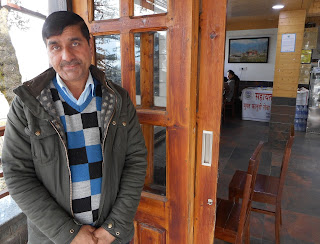 Walking back, I encountered a group of young men with a banner, shouting abuse about .  A few days before, in , a suicide bomber had killed forty-one Indian Border Guards.  In , it was widely thought that the Pakistani army was behind it and people were angry. I went to talk to them.  They explained their anger.  I asked for a photograph.  Immediately, they forgot their cause to turn and pose with grins and those two fingered selfie salutes. Then they turned and continued their yelling. 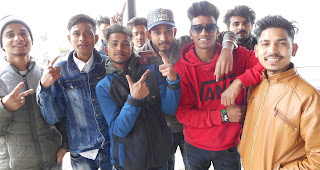 Sometimes you have to dig a bit to find what a town has to tell you.
Posted by David Higham at 02:49