A Day in Old Delhi

We emerged from ’s 21st Century metro at Chandni Chowk station and put our watches back three and a half centuries to Shah Jahan’s great seventh city of – Shajahanabad. But our watches were still wrong; time does strange things in Old Delhi.


Chandni Chowk, the main street that gives its name to the old city, was originally built as a canal to reflect moonlight and that is what its name means.  It is hardly that today. Work is underway to pedestrianise it.


Looking up, I could see the upper floors of the great havelis, mansions built by courtiers and rich merchants in the seventeenth century. The women of these houses, kept in purdah, could talk to each other and spread gossip from window to window across the narrow streets.


Havelis look inward. A narrow doorway or dark staircase revealed nothing about what lay within.   Work was going on to restore it. Later, we paused for chai at a haveli now converted into a boutique hotel (Haveli Dharampura - http://www.havelidharampura.com). 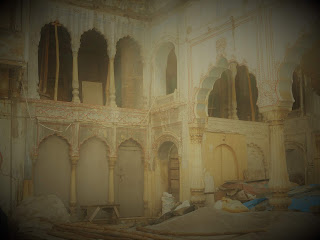 Surekha, our excellent guide, led us through just such an entrance and we quickly found ourselves in the sunlit courtyard of a broken down haveli.


At street level, we might have been in Tudor London. Small shops, workshops and factories have taken over the front ground floors of the ancient houses. The street that had once been the was now a street of electricians.  I concede that old would not have had a street of electricians and in Chandni Chowk, the electrical shops sell cheap, gaudy, Chinese LEDs.  I told you that time does strange things in Old Delhi. There were streets of jewellers and silversmiths, where delicate silver ornaments, finely worked, were sold by weight. A delicate silver sculpture of basil leaves cost us about £6.

We walked on. A slight widening of a narrow street gave room to splendid gentlemen who tucked the instruments of their calling into crimson turbans. Their customers stood quietly, heads cocked to one side as the turbaned practitioners chose exactly the right instrument to clean their ears. The customers were about to hear more clearly the motorbike horns, bells and the yells of hawkers in the busy street.


The motorbikes were yet another 21st century intrusion into Old Delhi. Their riders drove them expertly between handcarts, cycle trishaws and nonchalant pedestrians. 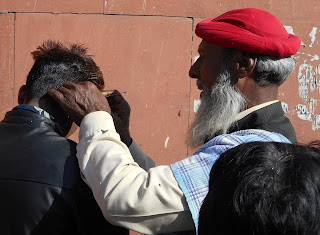 It was hungry work, walking the alleys and streets.  Our wonderful guide, Surekha, was alert to our noses twitching at the smell of some new delicacy.  Lentil pancakes, sweet puddings of thickened milk with spices and Kulfi ice cream gave us precious moments of rest and refreshment. 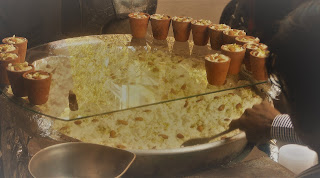 Even before we turned the corner, we knew that we were approaching the spice market.  There were also sellers of nuts and dried fruits sold either in bulk or as pretty house decorations.  Our fruit, not and mango stone decoration now hangs in our kitchen with a clear instruction that it is not to be eaten.  Not only were their bowls of lemons decorated with green chillies for sale, people had also hung them up outside houses to ward off evil. 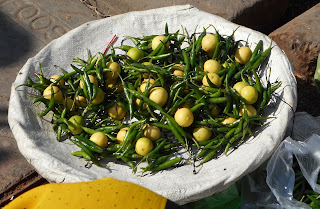 Not every street was quite so aromatic and delicate. From the front room, open to the street, of a small house came the rhythmic clank and thump of a sheet metal press.  We were in the street of iron and metalworkers where proper ironmongers still presided over man caves of pots, pans, tools and fixings. A man could spend an hour in such shop imagining himself a craftsman.  Copper gleamed from shops selling plumbing. 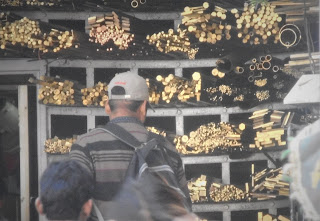 On a smaller scale, teams of men squatted in workshops making office ring binders.  You know the finger hole in the back of a ring binder?  Well one man punched the hole and the next fixed the metal ring with three taps of a hammer on an anvil.  He made about five a minute, every minute of a long day.  He did it yesterday and will do it tomorrow, perhaps every day for the rest of his life.  He must be paid a small proportion of the pennies that the ring binder sells for.  At this level, is a penny economy and yet the high-rise buildings of modern, booming can be seen from here.


A modern person might ask why we tourists insist on spending our time in a tiny, outdated and poor part of , while ignoring prosperous, booming and modern .  They have a point but visitors to do not come to gaze at but the and the Changing of the Guard.  All modern cities resemble each other.  A bar or modern coffee shop in will be much the same as in or Hackney.  What we tourists want to see is what is different and, perhaps, soon to be lost. The street of wedding dresses and fabrics, fabulously coloured and bejewelled was where Old and came together.  Modern, young women, in jeans and tee shirts, sat cross-legged in tiny shops while the sellers flung down swag after swag of red wedding dress fabrics that would do a Bollywood film proud.  Only Chandni Chowk can give a modern bride the look she wants on her wedding day. 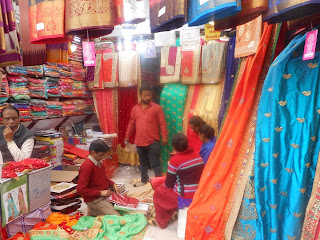 Adrienne’s purchase in such a shop was more modest, she blew about £1.20 on a chunky necklace made out of wood shavings.  Nothing goes to waste. 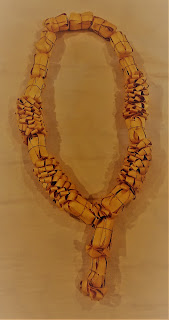 I have not mentioned the names of the streets. There were no signs though some businesses showed their address.  Few of those matched anything I  had on a map of Old Delhi.  I can identify where we went in to Shahjahanabad and where we came out but everything in between will always be a mystery.  As the crow flies, we had covered about two miles but we must have walked six.


The metro, like a time machine, brought us back to our hotel and 2019.