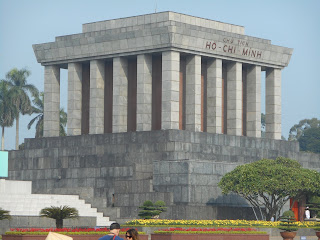 In , an obligatory visit on a Monday morning to the Ho Chi Minh mausoleum reminded me that we were in the Socialist Republic of Vietnam. It seems to me that has given up on all but three aspects of socialism: the one-party state, corruption and the mummified corpse of the great leader.


Luckily for us, Uncle Ho is closed for maintenance on Mondays. He is also closed for the months of June and July while Russian experts work their grisly magic on the leader’s corpse. Thus, we were spared the queues and security checks involved in entering the mausoleum to pay our respects. We could only observe the mausoleum from the great windswept parade ground that surrounds it. The architecture of the mausoleum is, they told us, reminiscent of the lotus flower. Perhaps it was exactly that; as imagined by an architect versed in totalitarian brutalism. We were there for the hourly changing of the guard. Non-commissioned officers in white uniforms as braided and be-medalled as any field marshal goose-stepped to their posts. The mood was lightened by observing the guide to a large group of Chinese tourists administering the most fearsome tirade against three of his flock who had had the temerity to sit down for a moment and fall behind. 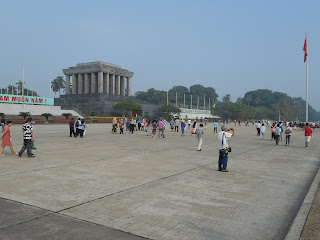 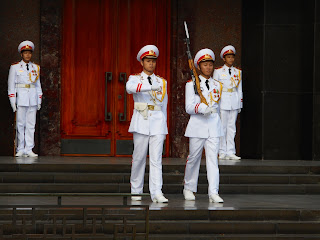 We also saw Ho Chi Minh’s modest house and museum. I am happy to believe that he lived as simply as his house and study would indicate. Ho Chi Minh had asked for his ashes to be scattered throughout the provinces of .  The party thought his body would serve the cause better in a mausoleum. The market ethic has reached even here. The only way out of the complex was through the gift shop, or rather a group of gift stalls. I had hoped to buy a book of Ho Chi Minh’s writings or a biography, anything that would give me more information. No luck with that in the stalls of fairground tat. No memoirs, but I could have bought rubber chickens in two different sizes. 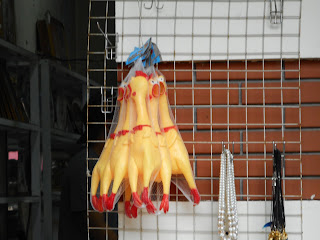 We went onto the Hanoi Hilton a sinister and nasty prison originally built by the French. The exhibits and explanations contrasted the way in which the prison was a place of torture, cruelty and death under the French colonialists with the kind and considerate treatment handed out to cheerful and grateful American prisoners of war.  Try telling that to those that were there.