The hot afternoon cooled into evening. The Captain skilfully moored our Nile cruiser at the small town of Dendera.


Alongside us was a sort of open-air enclosure in which some 200 white cotton- covered seats were placed facing a stage.  There was to be a wedding and I would have a grandstand view from the deck.  The happy couple, I learned, would have been formally married in the mosque the day before but the bride had stayed with her family that night.


About a year earlier, the prospective groom will have endured a fierce interview with the father of his intended.  He would have had to establish that he had a job and that he had somewhere to set up home.  Then he would have to propose the sum of money that he had available.  The bride's father would then have to put up twice that amount as a dowry.  The bride then used the combined fund to set up their future home. The groom’s role was to take just the right amount of interest, while deferring, naturally, to his future wife on every important decision.  He would have been wise to assume that every decision was important.


Imagine, for a moment, working out how to pitch just the right figure.  Too low and the bride’s father thinks you unworthy and the bride will feel short-changed.  Pitch too high and you embarrass the man whose permission you need to marry.


Tonight’s ceremony would unite the two extended families. Only after that would the honeymoon start.


Excited children ran about.  The front ten rows of seats on the right hand side filled early with the senior women, soberly dressed, but with bright headscarves.  They were engaged in the serious business finding the seat that properly reflected their status.  The men were nowhere to be seen.


A raucous band rattled tambours and blew coarse trumpets.  The bride and groom were on their way.  Even the men started to take their seats on the left hand side of the congregation and a curtain was drawn to separate the sexes.


The fanfare reaching a crescendo and the bride and groom arrived.  To the noise of the band, there were now added clapping, whistling and ululation.  The groom was a serious looking young man in a western-style white tuxedo.  The bride wore white, mostly traditional, but with something of the western style of wedding dress.  I had noticed two shops selling white meringues of wedding dresses on our progress through Egyptian towns.


It was a hot evening and under the relentless flashing neon and camera lights, the bride fought with a fan to keep cool under her tight white hijab.  She looked happy and confident as she sat on a throne, where she was subjected to a great deal of sisterly and motherly fussing.  The groom looked less at ease, possibly impatient.


The band continued louder than before.  Lights rotated and flashed, gas flares roared and a camera on a moviemaker’s boom swooped over the audience and the couple.  The bride stood up and danced amongst the women while the groom danced among the men.  Men in traditional desert dress danced in a fog of dry ice, whirling dangerously heavy, wooden staves. Just 20 or 30 people were dancing and filming as the bride and groom eventually danced together; perhaps for the first time in their lives.  Nearly all the other guests, there must have been 150 of them, remained still in their seats like a cinema audience, the curtain remained between the sexes.  If the audience were sharing in the exuberant joy at the front of the arena, they did not show it.


The stamina of the wedding party was greater than mine and, after a couple of hours, I left them to it. 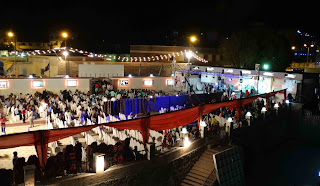