Travels in South America. Market Day at Guamote In Ecuador 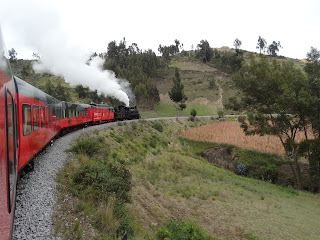 Feeling intrusive at a proper market in the high Andes


The Puruha people of the high Ecuadorian Andes have been holding a market at Guamote once a week for around 4,000 years.  They have probably always held it on a Thursday from before Thursday had a name.


The Tren Crucero with us on board crept into the market square of this small town 3,057 metres above sea level.  As it came in, traders moved off the track in front of it.  As the last of the four carriages arrived, the market closed in behind.  I could tell this had happened because, as I alighted there were people and tethered pigs and sheep sitting on the track within feet of each end of the train.


The people here have seen the Incas come and go and I got the impression that they were now patiently waiting for the Europeans to leave.


This is a proper market.  There are no trinkets to sell to us tourists, no knick-knacks or alpaca scarves.  We are ignored as we walk about and they get on with their lives.  I feel intrusive and I resist the temptation to lift the camera hanging round my neck.


The only way to break the ice is to do some shopping.  I buy a couple of fresh, sweetish bread rolls decorated with a pinch of hundreds and thousands.  I tell the stallholder they are delicious — it is true — and I am allowed a photograph.


The colours and textures are wonderful, dignified women in wide skirts, puffed up with voluminous underskirts.  They call them mother and daughter skirts.  Bright, green, magenta, pink or blue woollen shawls are draped round their shoulders covering embroidered white shirts.  Bowler hats or fedoras in brown or black crown nut-brown weather-beaten faces.  Sharp dark eyes are emphasised by crows' feet earned by long days of work in the sun and wind.  Noble faces like this are not to be photographed; memory will have to do.  The few youths in nylon football shirts jar.


Bright vegetables and the mixed stock of the rope sellers set off the colours of the clothing.


The chatter of the market is briefly drowned out by an orange seller announcing his keen prices by loudspeaker from his pick up truck.  His wife walks behind making the sales. 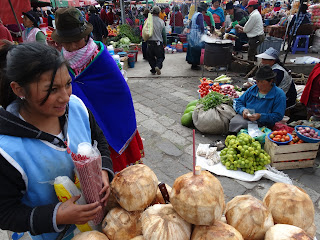 Most other food is on the hoof.  A woman walks past with a triumphant grin, clutching a squealing piglet to her chest.  Across the way a lamb is being half carried, half dragged out of the market.  Its bleating suggests it has just found out the meaning of the phrase, 'Lamb to the Slaughter'.


I cannot manage a hot, newly cooked empanada but it looked good. 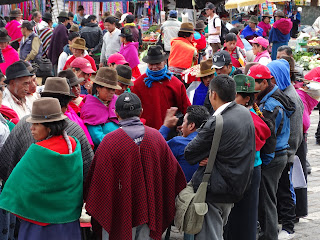 I notice a three-deep semi-circle of attentive farmers listening to a man selling patent medicines.  I do not understand his language but he is good, they are intrigued, he makes them laugh.  He knows how to read his audience.  At the end of his pitch, most of the crowd fades away.  They enjoyed the show but they are not buying.  The snake oil salesman closes up his case philosophically.


I make my way back to the train and take a few discreet long distance pictures.  The engine sounds its air horn.  The traders ahead of the train move out of the way at their own pace and we intruders move on leaving behind the people who belong here. 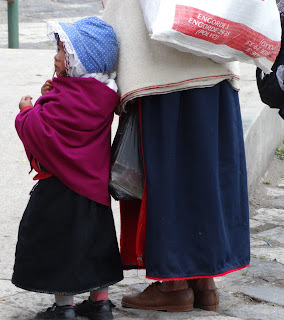