Kayaking the Yarra by Night

The best way to see Melbourne by night is from a kayak on the Yarra river.

The grey and rusting Shed No. 2 on Melbourne's north Wharf was further than anyone thought from the free City Circle Tram.  The adventurers arrived in dribs and drabs in the drizzle.  A wan, late afternoon sun illuminated the only colour to be seen; six bright yellow kayaks in a neat row on the jetty.  Kent Cuthbert greeted us.  He was a tall, tanned Canadian who had lived in Melbourne for eleven years.  He and his assistant Mark, an Australian of Lithuanian origin, gave us some paddling tips and gave us a simple guide to the Rule of the Road, "Keep out of the way of anything bigger than you". 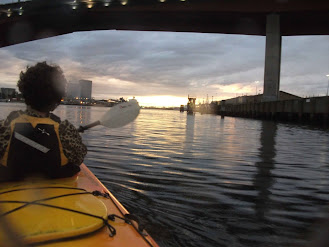 We, that is a group that included Germans, British and Americans, were mostly young.  My wife and I, at around 70 were by far the oldest and should have been acting our age.  The only Melbourne residents were two ex-pat Brits.  We all took our two-man kayaks down to a pontoon and embarked.  Kent led us out round the basin for a bit of practice.  Then we followed him to a new pontoon, where we rafted up. "Welcome to my Fish Restaurant," said Kent and went off to fetch a box of wrapped goodies.  We used our paddles to pass these around.  As the sun went down in muted shades of pink and orange, we dined in the drizzle on fish and chips.  It was much more fun than it sounds. 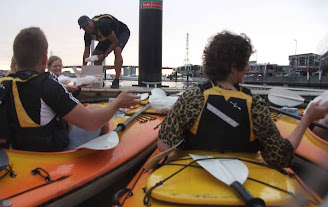 Dinner over, Kent lead us up river towards the City Centre.  Mark, in a single kayak, acted as sheep dog and rounded up those of us who straggled or strayed.  It had become dark, the bright lights of office and apartment blocks lit up the black water surface.  A flood tide cancelled the river Yarra's natural flow and the going was easy.   At five to nine, we rafted up again opposite the Crown Casino.  Mark turned the raft of kayaks so that we would all have a good view.  We could just about see, against, the bright city lights, eight towers each about 10 metres high along the riverbank.   There was a hissing and then something between a whoosh and a boom as the first of the giant gas flares exploded into the night.  Then each of the eight flared up in turn and then in unison.  The flares saturated the river (and our cameras) with light and heat.  The Gas Brigades as they are properly called use a much gas in each flare as an ordinary household does in a year.  We had been comprehensively wowed. 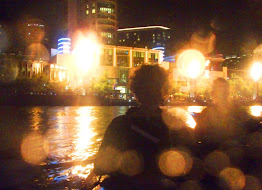 The show over, we paddled further up the river to Federation Square.  We climbed (pretty stiffly in my case) out of the Kayaks and helped stack them on the trailer that had been delivered by Kent's wife.   We then damply walked our way through Melbourne's exuberant evening revellers to our hotel.
It had been a wonderful way to see Melbourne by night.  Even the email request for feedback from Kayak Melbourne was different.  It came in the form of a postcard that said, "Wish you were still here!"  Indeed, I wish I were.
We kayaked with      Kayak Melbourne
Posted by David Higham at 08:47