A pilgrimage and a connection in a cemetery.

On a wet and blustery early summer's day in November, the cemetery in had a Gothic feel to it. Eucalypts with dark, grey trunks grew out of the brick and beaten earth paths of reddish brown.  There was birdsong but it was hard to hear over the hoarse cawing of crows flapping through dark foliage.  In the Victorian part of the cemetery, I was among grey tombstones mottled dark with age.

The atmosphere suited me; I was on a pilgrimage to pay my respects to Mary Higham.  I soon found her memorial.  Without being ostentatious, it had a Victorian dignity to it. 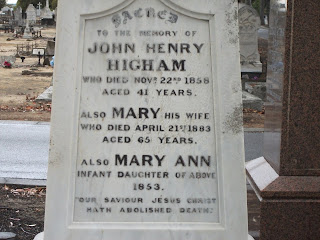 It stood among a small thicket of later family tombstones.  A modern sign explained some of her history and described her as 'Mary Higham 1819 to 1883 Merchant'.  I think she would have liked that simple word 'Merchant' it quietly reveals a great deal about this remarkable woman. There was also a photograph.  She is wearing a bonnet graced with flowers and lace.  She is round-faced with small spectacles.  The eyes are kind but there is a determined set to her mouth, I got a feeling of steel. 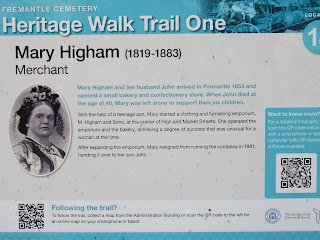 When Mary was born in Northamptonshire, George III was king of .  At the age of 34, Mary and her husband John sold all that they owned: paid about £20 each for their passage in steerage and set off from Liverpool in the ship Sabrina to start a new life in the young colony of .  Sabrina was less than 50 metres long.  On that long and filthy voyage, Mary cared for her five-year-old son Edward and an infant daughter Mary Ann.  Little Mary Ann died either on voyage (five other passengers did) or soon after arrival.  Mary must have suffered that loss all her life because on the tombstone, no doubt at Mary's request, is added 'also MARY ANN daughter of the above 1853'.  There is no other record that little Mary Ann lived or died; she has no known grave of her own.  Even the exact date of her passing is lost.

On Monday 13 June 1853, Mary, now 35, arrived in and, with John, set up a bakery and confectionary business.  Within about four years, they had three more children.  On 22 November 1858, 5 years into their new life and with their youngest son Harry, just 5 months old, John died.  He was 41. Mary was a 39-year-old widow with four children to bring up and a business to run in a strange land.  A lesser woman might have given up and run home, not Mary. Mary set up a new business, a sort of early department store in a new building on the corner of and High Street in Fremantle.  The building that stands there today is called Higham's Buildings.  The sign, confidently carved into the stone, says ‘M. Higham and Sons’ for Mary took her two elder sons out of school as soon as she could to help her run the business. 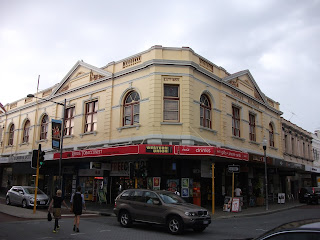 The new colony was thriving and Mary imported the things the new colonists wanted.  She sold silk dresses and spades; tweeds and galvanised tubs; ribbons and rakes; stationery and saucepans; iron bedsteads and buckets.  She took in lodgers. While her two sons grew up to go into politics, Mary was barred from such a career by her sex.  She avoided exclusion from the Chamber of Commerce by setting it up herself. Mary's business grew; she diversified into land, pearl fishing and even mining.  The business she was to pass on to her sons was substantial.  Mary was still working until a few days before she died aged 65 in 1883.

Only two of her grandchildren were born before she died.  The second of them was Edward.  She would have known and no doubt loved him for the first year or so of his life.  Edward grew up and re-migrated to .  I knew him too but near the other end of his life.  Edward was my grandfather. I have held the hand of a man who held the hand of Mary Higham

A newspaper once described Mary as "a person of remarkable energy and decision of character".  I stood for a few moments at the grave of this extraordinary woman and tried to share our one common memory. I wished my great great grandmother goodbye and walked back through the cemetery to the bus stop.  The sun came out.