A Love Letter to

This rather wonderful book is Tom Chessyre’s seventh.  He has a talent for writing train-related travel books and Slow Trains to Venice will not disappoint his readers.

Chesshyre relates the tale of a more or less random rail journey from his home in Mortlake to .  He arms himself with a backpack, filled mostly with books, an and a longing to be on the move by train.  It takes quite some dedication and curiosity to cover 3,990 miles to make what could have been a 700-mile trip. Chesshyre takes in Northern Europe, , on the and the Balkans.

Concerned mostly with the journey itself, Chesshyre gives us only snapshots of the cities he visits.  As he puts it, he dips a toe and moves on. He does, nevertheless, have the knack of finding something intriguing or offbeat in most places.  is the exception.  In a rush to meet his girlfriend in , he has time only to describe his hotel.  His descriptions of the sometimes-quirky hotels he stays in are more a warning than a recommendation.  What he does so well is to find, and share with his readers, something fascinating in the mundane and everyday.   As he says himself, the traveller by plane wants dull efficiency, not a story.  The traveller by train always has a story to tell.  He has and he does it well.

Chesshyre fears for the future of some of the European countries he visits and worries about the rise of populism.  He is no fan of Brexit.  The subtitle of the book is A Love Letter to Europe. Many would join him in writing such a letter but he conflates with the European Union.  Those that share his view will not be troubled.  Those that do not can still enjoy his storytelling.

Slow Trains to Venice went to print before Covid-19 hit European travel.  It may not be possible to travel as Chesshyre did for some time to come. In the meantime, the armchair traveller could not ask for a better companion. 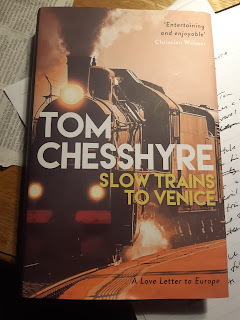