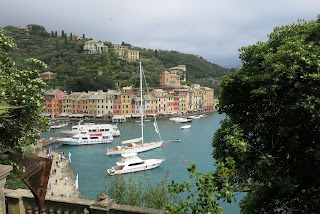 The ferry from Santa Margherita disgorged about 150 of us onto the quay.  Another ferry was close behind.  At the top end of the tiny town, buses were unloading 50 tourists at a time.  We were not alone in making a day trip to . Every holiday brochure for the Italian Riviera shows a picture of .

is said to have permanent population of just 450.  There was five times that number jamming its only street.  is a fake.  Its appearance is fake; its charm is fake.  It is a celebrity of a destination, famous for being famous because famous people have made it so. Its buildings are painted in trompe-l’oeil to make them appear stone built with elegant arches and folderol.  The variation in colours comes from a palette determined by the local commune drawing on some long-forgotten tradition.

Over a century ago, in the days when it was an unspoiled fishing village, rich and famous people built gorgeous villas above the town.

New generations of the rich and famous discovered this rich man’s hideaway. They bought up or rented the villas and moored their gigantic yachts in the little harbour.

And so, the day-trippers, me, included come to see this celebrity enclave.  The town has developed to welcome us.  Restaurants line the streets and their tables surge out onto the town square and the quay. In between there are smart shops; I spotted Dior and Balenciaga.  A few local clothes boutiques offer classy summer wear at a price. Then there are cheap pizza takeaways and tacky souvenir shops for the rest of us.  There is still money on show.  In the restaurants were high maintenance people who would not look out of place at or in .  If you had that sort of money, why would you choose to eat your zuppa de pesce inches from the great international public shuffling past your table gawping at you?

In the harbour were three suspiciously picturesque fishing boats.  They would be entirely inadequate to supply the industrial quantities of seafood consumed in ’s restaurants.  There are only about thirteen fish left in the grossly over-exploited .  imports 5.5 billion Euros worth of fish each year.  ’s catch of the day arrives in a lorry.

One good reason for visiting is that there is a boat from there to the Abbey of San Fruttuoso and its submerged statue, Christ of the Abyss.  I am told that this is well worth a visit but on the day we were there, it was too rough for the boat to make the trip, which probably added to the congestion in .  You can also reach the Abbey by boat from the charming and unspoilt town of , a few kilometres north of and accessible by train. 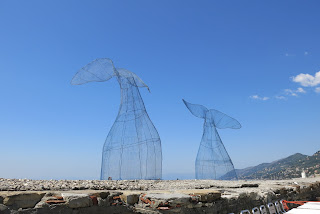 Camogli is a small town with a small harbour. While not exactly off the tourist trail, it has a character of its own, feels properly Italian and we spent a very good day there.  There is a descent from the railway station to this small town.  If you take the steps, you will find yourself at Camogli’s intriguing . It closes at midday on weekdays.  Please check the website for opening hours. Camogli Maritime Museum  The museum looks as it has had some money spent on it. It is fascinating for those of us with an interest in ships and the sea and there is a lot to interest the more casual visitor.  I particularly liked the portraits of ships.  Some of the sailing ship pictures had sails made in fabric that billowed in 3D. They have a digital archive and they showed me a 19th century Lloyds of insurance contract written in Italian. I have seen plenty of ships in bottles but here they have an entire harbour with ships in a bottle. 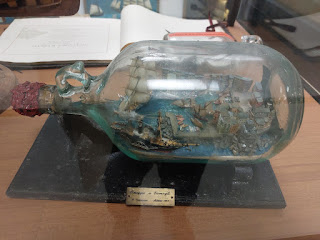 It doesn’t take long to walk to the harbour and the main street of the town.  The street is lined with cafes and gelateria.  The harbour itself has the shape of a crab’s claw.  The outer curved wall makes for a nice walk and there are two whale tails made of blue metal netting that make for a dramatic view.

In the town, there is a church that is worth visiting.  It was closed the day we were there.

I also noticed a bookbinding and bookshop.  It is closed on Thursday. That probably saved me money as, peering through the window, I could see beautifully bound notebooks and journals.

If I have given the impression of a rather closed sort of place, that is wrong.  The town is quiet and unassuming but it is charming in a non-touristy way.

By the inner wall of the harbour is the ticket office for boat trips to San Fruttuoso.  I did not have time to make the trip that day though with a bit of forward planning, I could have done.  Camogli is a better place to embark on your trip to the Abbey.

It was time for lunch. At the very end of the inner wall of the harbour, we found a small café called I tre merli, the three blackbirds.  We sat outside enjoying bruschetti and then it seemed necessary to have gelati and then coffee and limoncello.  An hour or so passed as we watched the comings and goings in the harbour.  A perfect interlude.  I tre merli looked and felt like a small family run place.  They also offered a locanda or rooms to let. But no ordinary rooms to let; the brochure shows that each room has a sensational view of the harbour and there is a spa, whose delights have been translated into English as “cuddle yourself in the SPA” and why not indeed?

There was a surprise on their business card that came with a very modest bill.  I tre merli establishments can also be found in Genova and there are four in . It has  quite a story that you can read n its website.  I Tre Merli

The gloss of or the charm of Camogli?  Camogli every time for me.