The Stone Axe-Head — a Long Journey in Time 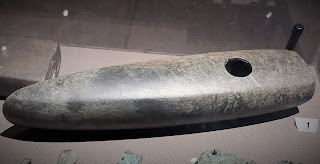 In the ’s stunning exhibition [1], is a beautiful and remarkable object. It is a stone axe-head and it has a story, a long story.

In 1942 BCE (that is 4,000 years ago) in what is now , a family buried their father, a man whose name we do not know.  With him, they buried the stone axe-head that I gazed at and revisited at the .

The axe-head is about the length and girth of a boy’s forearm from elbow to wrist.  It is symmetrical in two planes and pierced at its heavier end by a precisely circular hole for the haft.  The colour of the stone is elusive. At first glance, it is dark grey, just short of black. As you look at it, the darkness varies; there is a hint of green.  Someone has polished the surface to a deep shine.  There are flecks and hints of red, blue and green appear.  One end comes to a rounded chisel tip.  The other, the haft end, is thicker and blunt like a hammer All its edges are pleasingly rounded.  If I could have picked it up, it would have had heft.

The axe-head is ornamental far beyond utility.  A rougher piece of rock would do just as well at cracking a skull.

This object is a masterpiece of Stone Age art and artisanship.  Someone working with stones, sand and animal hide spent weeks making it.

The man it was buried with lived at a time when, in , the Stone Age was giving way, after 1.3 million years, to the Bronze Age.  The man’s sons may have wondered at their father’s attachment to old technology before laying it in his grave.  The describes the axe as a symbol of power.  It requires no greater speculation to think they placed it in the grave as a mark of respect.

The man lived long before Homer. He was a near contemporary of Abraham.

But it is the axe-head that has the story.  By the time it was buried with him, it was already 2,500 years old.  We can never know the name of the Stone Age Artisan who perfected this object 6,500 years ago, when the Sahara was green and work would not start on for another two millennia. What is truly extraordinary is people revered and cherished this work of art for 120 generations before they buried it with its last owner.