For my first post, here is a memory of a travel moment on a voyage from Singapore to Bahrein from more than 50 years ago.

All I could hear in the hot, humid control room was the roar of the great diesel engines as they sucked a gale of air through the conning tower hatch.  A forty-foot climb up a ladder to the bridge of a submarine on surface passage across the brought me to a new world.  I breathed in air that tasted and smelt of nothing, clearing my nose of the constant smell of diesel and unwashed bodies below.


In the control room, everything had been close enough to touch.  On the surface, there was no solid object between me and the horizon, nor had there been for three days.


The inky turquoise disc of the sea met the perfect dome of the sky all the way round.  At the horizon, the sky was pale blue, darkening to deep azure overhead.  I took out my sextant.  I fitted the darkest red filter to the upper telescope.  I put the sextant to my eye and found the horizon in one half of my view and the reddened disc of the sun in the other.  With the micrometer wheel, I brought the sun's image down until it kissed the horizon.  I kept turning the wheel to follow the sun's ascent to its highest point as it crossed the at noon.  My fingers stopped and I knew that the sun had reached its zenith.


The reading would give me our exact latitude but I paused because, just at that moment, I was physically aware that I was perched on the outer surface of a sphere rotating under the Sun. 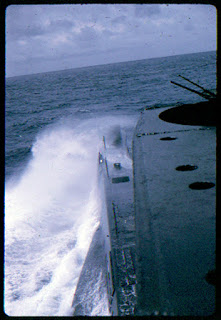