The Story Teller of Damascus

This is the story of an encounter with another story teller from 2010, when Damascus was a happier place. I wonder whether Abu Sadi still tells his stories. 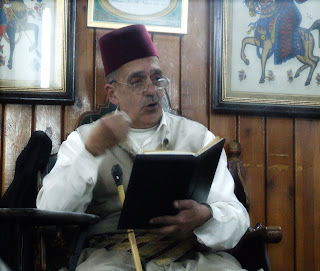 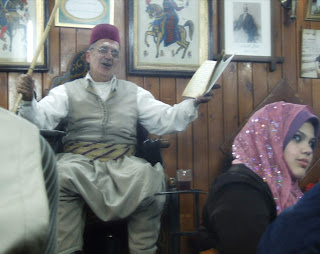 Since Scheherazade told her stories over a thousand and one nights to King Shahryār in the golden age of Islam, the art of story telling has been an important part of Arab culture.  Visiting , I wanted to see and hear it for myself.


It was easier than I thought to find the Al Nofara coffee shop in the maze of the al-Hamidiyeh Souk in the old town.  The Umayyad Mosque is set into the souk.  At its Southeast corner, under its imposing walls is a set of steps.  I went down those steps, turned right into al-Nofara alley and there was al- Nofara itself; the oldest coffee shop in .


In the early evening Damascenes, mostly young, and a handful of tourists were seated at small tables spilling out onto the street.  The place was alive with a score of conversations.  Aromatic smoke from a dozen nargilehs drifted upwards until dispelled by the ceiling fans.  I saw what I wanted.  At the back of the shop was a chair, a throne, on a raised dais.  On the wall behind were magnificent glass paintings depicting heroes of Arab legend.  In front of the empty chair was a small, circular table.


I found a table with a good view and ordered coffee.  Only water, coffee and tea are served in this traditional coffee house.  I tried to order in my ill-pronounced, phrasebook Arabic.  The owner repeated my order in English.  “But I am trying to speak Arabic,” I protested.  “Why?” he shrugged.


Not long after the evening call to prayer from the mosque, the story teller took his seat.  He was traditionally dressed, a tabouche on his head, a stick in his right hand and a book in his left.  On the small table was a glass of tea.


I was not going to understand a word of his classical Arabic but Abu Sadi’s performance was no disappointment. The story began.  I believe it was part of the story of Antara from the Sirat Antar, a pre-Islamic romantic story of chivalry.  Antara was born a slave to an African mother.  From this humble beginning, Antara became a great knight and poet.  Antar is an eternal hero in the Arabic-speaking world, equivalent perhaps to the Knights of the Round Table in our own mythology.


Abu Sadi told his story with gestures, his voice rising and falling with the action.  Exciting actions were marked by banging his stick loudly on the platform.  His face and eyes ranged across the spellbound audience.  He seemed almost to be seeing the action unfold before him.


The story was obviously a familiar one. Urged on by the story-teller, the audience called out well-practised responses.  There were elements of an English pantomime.


The story came to and end, I sat back, exhausted by the drama of which I had not understood a word.
Posted by David Higham at 05:28