Sailing an Outrigger Canoe off Dar-es-Salaam

And here is another, more recent nautical tale.


A warm breeze was blowing in from the . I checked the sheet, the leeward outrigger dipped into the green blue waters of and the canoe leapt forward on a broad port reach.  This was pure, simple sailing; one of those golden moments.


A couple of hours earlier I had wandered down to the fish market in the village and idly watched a man with just an adze building a small fishing dhow from scratch on the beach.  He had no plans, no rule: just a good eye and a skill passed down the generations. Small dhows and fishing canoes were drawn up on the beach or lay in the shallow anchorage a few feet offshore.  My presence as a stranger, as I hoped, attracted attention.  I was soon talking to a couple of the fishermen.   My few words of Swahili and their few of English made communication difficult but we both understood that I would like to sail one of the outrigger canoes.  Baba (Grandfather) was fetched as he spoke good English.  A deal was done and money changed hands.


I waded out to the canoe.  In my honour, the inside of the hull was rinsed out with clean seawater using the bailer — a cut down plastic jerry can.  The long deep hull had been formed from a single dugout palm trunk.  The freeboard was increased by nailing a broad, single plank on each upper surface of each side.  These were nailed down through neatly recessed holes with great iron nails, the only metal in the whole construction.  The log had been faired off to a fine raked bow and a cutter stern supported a wooden rudder and tiller.  Two segmented spars crossed the hull and supported the outriggers on each side.  These were finely cut planks of palm worn smooth by years of slicing through water.  Too busy to catch each other’s names in the excitement, we called each other “Captain” much to our mutual amusement.  Captain One lifted the sturdy mast and stepped it though a hole in the forward spar down into a socket in the keel.  The halyard passed forward to aft through a well worn fairlead near the top of the mast.  As Captain Two and I hauled the yard aloft, Captain One raised the mud anchor — the rusty crankshaft of some long dead car.


The lateen sail was made of faded cotton.  It was a triangle but the apex had been cut off to provide a short luff and the classic leg-of-mutton shape.  The halyard hoisted the single yard so that the mast was about one third from its forward end.  The tack was hauled hard down to the bow.  We set off on a starboard tack.  The yard was slung to the port side of the mast, close to the fairlead and we hauled the tack hard back and secured it round the after outrigger spar.  Finally, a single shroud led from the yard to the windward outrigger.  This gave the mast support and held the sail close to the mast.  It set beautifully.  It was an almost perfect foil and an example to any Bermudan rig.  With a Force 2 and so little weight, we quickly gathered speed and sailed close-hauled across the bay.  I reckoned we could just about get to five points off the wind.  The technique was to use speed rather than every last windward degree.  The best indicator that the canoe was sailing sweetly was the fine bow wave on the leeward outrigger; the speed quickly fell off if I sailed too close to the wind or too far off.


On this tack, the next stop would be and I began to think about how we would change tack.  I guessed that we could not go about; the canoe would not have enough momentum to take the hull and both outriggers through the wind.  Sign language indicated that, as expected, we should wear ship.  I had in my mind that we would dip the lug but I was not sure how it would work.  Some lateen rigs leave the yard on the same side of the mast, giving one bad tack.  What happened was neither.  First the shroud was released.  As we went round the long part of the yard was swung round forward of the mast on the halyard.  I missed the moment when the sheet and the sail were quickly passed round the mast and hauled aft.  This time the sheet was hooked to a notch in the after spar out near the outrigger to allow the sail to set across the hull for a broad reach.  The shroud was then secured to windward.  It was as we picked up speed on the port reach that I experienced that golden moment.


I tried to describe my own gaff cutter to my fellow Captains.  I thought I was having little success in making myself understood.  A few minutes later we spotted a modern Bermudan rigged yacht.  “Cutter” cried my Captains with more enthusiasm than strict accuracy.


The sail did not flap, though it frayed edges fluttered prettily.  The only slight sound was of the hull and outrigger parting the water.  The tiller needed only the lightest touch and we raced back towards the anchorage.  My Captains appeared to have decided that I was basically competent and refused my offer to give up the helm as we approached the shore.  It was crowded with men in the water cleaning their nets, canoes at anchor and small dhows setting sail.  They pointed at an impossibly narrow space on the beach and we surged towards it still under full sail.  My two companions seemed relaxed about it but I was not; it wasn’t my boat to wreck.  But they were right; about two boat lengths from the beach, the breeze dropped, the speed came off instantly and with a satisfying hiss we rode gently up onto the sand and dropped the sail. I stepped ashore dry- 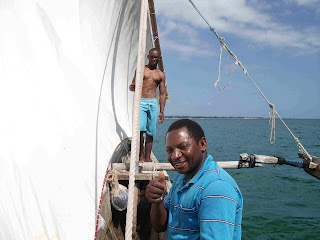 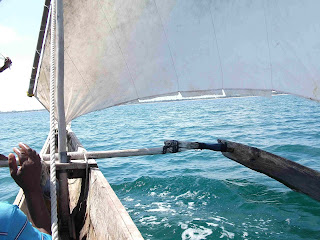 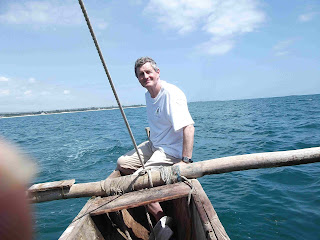 
I had been sailing in a boat of a design that is thousands of years old and now to be found from to the Pacific.  It was sailing as it has always been and as it always should be.
Posted by David Higham at 05:18