A Walk in Taroudant

Long ago, south of the seaward end of the High Atlas Mountains a goatherd lost her two children to a flash flood.  She spent the rest of her days wailing "Tarou dant": my children are gone.  This is the founding myth of Taroudant, the Berber City of Lost Children.


The medina of Taroudant is a stronghold protected by seven kilometres of high, thick pink walls of mud and straw bricks.  Even a hundred years ago this was a place or warring tribes of Berbers or, as they call themselves, Amazigh — free men.  Each town and, within it, each house displays a fortress mentality that persists.  Windows are small and barred and each house faces inwards.


They say that at night, the central square is a place of storytellers, comedians, musicians and purveyors of snake oil.  On the morning I was there, the sole entertainment was a performer who was the spitting image of the late Colonel Gadaffi.  He played about five notes and if no one gave him any money, he paused and waited a few minutes before exerting himself again.


I walked into the souk where exuberant displays of red, yellow and green vegetables tempted the shopper's eye.  At the same time, mounds of fresh mint and coriander delighted the nostrils.  In such an extravagance of plenty, I did not at first notice the withered pile of black rags that was in truth an old, emaciated woman too listless even to raise a hand for alms. Around another corner, a dusty man sat behind his dusty display of second hand and probably non-functioning kitchen appliances.  He was hardly rushed off his feet but seemed not to have thought to clean his stock to make it more attractive.  Perhaps he knew his market did not want it to look expensive.


The goods in the silver and gold shops, however, sparkled and flashed under bright halogen lights.  Berber women value silver.  They identify it with purity.  Arab women choose the gold that Berbers associate with evil.   A shop will sell silver or gold but never both.  In the silver shop, two Berber women had the better of the shopkeeper and after a lot of discussion, left without buying.  The shopkeeper seemed unmoved.  If God had willed it, they would have bought.


Walking on, I saw murals that conveyed some important message that was lost on me.  A not very fearsome warrior on a prancing white horse carried a book, probably the Holy Koran, in one hand and a pen the size of a lance in the other.  Is the pen mightier than the sword even here in ?


In a café under a blue-bloomed jacaranda tree, I met a man with his son Mouad, a boy of about six enjoying a serious morning at the coffee shop together.  His father drank coffee, Mouad hot milk while they shared a croissant and watched the world go by.  He was too shy to answer my poor Arabic but his father allowed me to take a photograph.  Mouad enjoyed seeing his portrait on screen.  Mouad's father and I invoked Allah's blessings as we said goodbye and I moved on to Agadir. 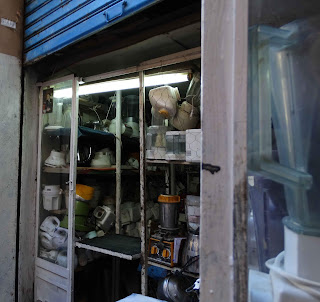 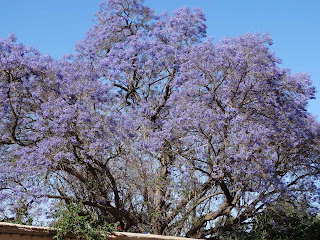 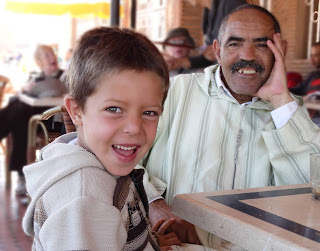 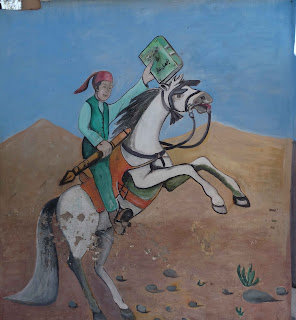