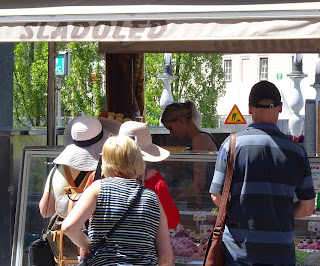 Sladoled is a better word than gelato. It is a very much better word than ice cream, a prosaic, workmanlike but unambitious phrase. Gelato is Italian, , a Neapolitan a sort of word.
Sladoled is a brave Slavic word, a word that works from the cool Croatian Adriatic to the mountains of .Sladoled is slippery and lickable. Sladoled, is onomatopoeic and, rather wonderfully, also feels like it sounds. Sladoled ranges from jet-black Croatian chocolate to Slovenian sour cherry. Sladoled melts in the mouth and slides coolly down the throat. Sladoled is both the action and the sound that you make when you use your tongue to catch melting ice cream running down your cone and onto your hand.
In , some of the signs over the sladoled stalls now say “Gelato”.  Stop, dear Slovenes, you have a better word; don’t let it die for the sake of us tourists. 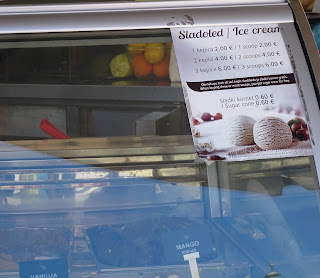 I travelled to with the excellent PTG https://www.ptg.co.uk/
Posted by David Higham at 02:37