An Unplanned Day In Rural Slovenia 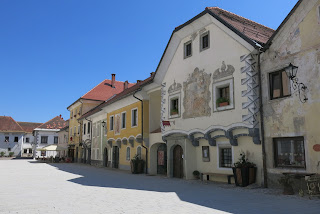 The train from Ljubljana towards Jesenice took us to the small, unmanned station at Radovljica. Our plan was to get a taxi from there to the even smaller town of Brezje where there is the Slovenian national shrine to Mary, “Help of Christians”. We are not Catholics but there is a museum of nativity scenes there. Adrienne has a collection of 50 cribs from our travels around the world and there cannot be many museums dedicated to her slightly odd collecting habit. We had to go. The way out of the station was up a dark, grey, damp, graffiti covered concrete staircase that brought us to the bottom of a steep, narrow road. There was no hope of finding a taxi stand. Bad start.
But then I saw two small signs “Tourist Information” and “Old Town Square”. Well, that was worth a look. A short uphill walk brought us to Linhartov Trg” (Linhart square), which turned out to be a town square dating from the 15th century. It is hardly a secret, it is UNESCO protected, but we had no idea it was there. It is a paved square lined by old townhouses rendered in painted in shades of cream with red tiled roofs. Municipal buildings form one side of the square, traders on the other.
We scrapped our plans for an early afternoon train back to the capital. The tourist information office got us by bus and a short walk through the Slovenian countryside to Brezje and the Nativity Museum. Who would have thought that you could fill 10 rooms with nativity scenes of all ages and origins? I liked most, the cribs from the Americas: the holy couple as porcelain flamenco dancers from Peru, a nativity scene in the palm of a hand from Mexico and a dread-locked infant from Jamaica.
Back in Radovlica, people were busy fixing green garlands over the nave of St Peter’s Church, while others arranged white flowers round the altar ready for a wedding. 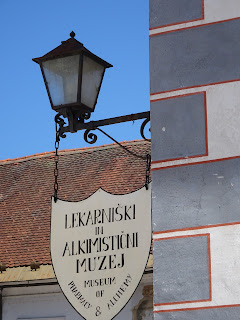 In the other corner of the square was a museum of Pharmacy and Alchemy that had only been open for 14 days. €4 each was repaid by a beautifully designed and interesting small museum. It is an enterprise started by Milan Plešec, a pharmacist, and his daughter Anna, who sold us our tickets. Mr Plešec had bought half of the building that had almost fallen into disuse as a nunnery, only 3 nuns remained. I asked what he had done with them. Anna laughed and told me they had been moved to other religious houses.
The origins of chemistry as a modern science were set out in the basement. Even though I studied chemistry at school and knew it had its origins in alchemy, I did not know that “Chemi” was the Egyptian word for the black earth of the Nile Valley. This was adapted by the Arabs to Al Chemy and thence by way of the age of reason to the science of chemistry. Upstairs was a collection of instruments 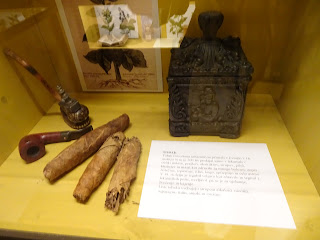 and tools of the pharmacist through the centuries from Egyptian through Rome to 19th-century European. It was gratifying to see tobacco in the form of huge fat cigars presented as a medicine.

Mr Plešec had displayed his collection of antiquarian books, pharmacopoeia and an Histoire des Drogues. It was quite right that these fragile and valuable books should be beneath glass but I would have loved to turn their pages.
The square has a few snack bars with nothing much to eat. We were rescued by a friendly fellow tourist who directed us to Gostilna Augustin where we had a long lunch of grilled local trout on a terrace overlooking the Sava Valley. The train we planned to return on came and went. We didn’t care.
Pausing only to admire a chocolate chaise longue commemorating a recent festival, we took one of the half-hourly buses back to Ljubljana. All right, it wasn’t really chocolate just made to look like it. 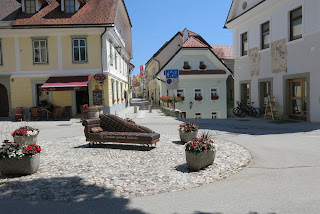 Notes
Museum of Pharmacy and Alchemy. Linhartov Trg 28, 4240 Radovlijca, Slovenia. Mioba.sp@gmail.com
The best way to explore this area might be by the Bled Hop on-Hop Off bus: Bled Hop on Hop off bus
Gostilna Augustin Gostline Augustin
There is a free guided tour of Radovljica every Tuesday at 10:00 am
I travelled to Slovenia with the excellent PTG Tours https://www.ptg.co.uk/