On the elusiveness of and the inadequacy of phrasebooks.


Does anyone still use a phrasebook? Or do we just rely on Google Translate. Phrasebooks can date quickly; though the apocryphal phrase, "Help me, my postillion has been struck by lightning" is nowadays seldom found. The real problem is that they just do not have quite the right phase for the particular moment.


Still, I kept my well thumbed Italian phrasebook in my pocket as we set out on an excursion to . At least they told us it was , all we saw was cloud and drizzle as we traipsed over cold, red and grey, lava fields, taking on trust that Etna's crater loomed over us.


The next day provided glimpses of the volcano through the back window of our bus as we travelled south and west through until the mountain was hidden by distance from our view.


It was some days later that we reached our on our journey back east. In theory, we could see Etna again except that it always hid behind its own private cloud.


That was why, at dinner that night ice-cream in the mode of Etna (at least that was my translation of the Italian menu) seemed the obvious choice. The waiter appeared with two huge conical heaps of ice cream in goblets, each topped by a sugar lump. With a flourish the waiter poured Sambucca over the sugar lumps and applied a match, causing the ice-cream mountains to flare up spectacularly. Etna at last.


Memorandum to Italian phrasebook compilers: please include in all future editions, "Aiutate me …il mio gelato va a fuoco!", which translates to "Help me …my ice cream is on fire!" 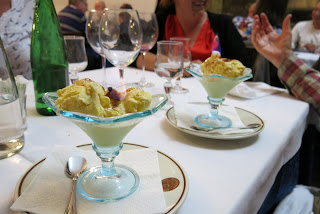