We did not plan it. We just found a leaflet in our room that evening, “The Fes Festival of Sufi Culture”. We took a battered red “Petit Taxi” to the , and bought tickets. The people there were happy to guide us to a restaurant nearby and told us to be sure to get back by eight thirty for a nine o'clock start.


It was just as well that we got back to the museum by 8:30; the nighttime garden courtyard was almost full.  We found ourselves among a happily noisy crowd.  I discovered that the man on my left was my new friend Mohammed, a philosopher from the .  His subject was the connection between Sufi music and philosophy.  He promised to email me about his book -- I am still waiting.  He went off to join friends; the audience was mobile to say the least.  Friends greeted each other across the rows of seats then clambered over to join them.


The courtyard was open to the sky with the elegant, illuminated arches of the building on three sides.  Behind the stage, trees were flooded with green, blue and magenta light.  The concert started, people were still arriving, as extra chairs were passed overhead.  The crowd was noisy and cheerfully unruly.  Arguments, no doubt about the music, broke out.  The music was sublime.  The Al Firdous Ensemble gave us the melodies and words of Andalucía, blended with an earthier African beat.  With the group was Ali Keeler, a guest with a British surname.  Perhaps it was he who introduced a Celtic-sounding tune, albeit with Arabic words.  The tune fitted well with the rest of the programme and, oddly, the audience sang along.  There must be some ancient connection between the people of the northwestern fringes of Africa and .  Toddlers cried and were hushed, people shouted to friends and people continued to arrive.


At the start of the second half, the Taureg group Tariqa Wazzaniyya trooped in to the beat of a single drum.  They were about 15 men in white robes and headdresses.  There was a moment of silence and then they started a deep, resonant chant of ‘Allahu Akbar’.  It was an old, repetitive sound straight out of the desert and it silenced the audience.  As their performance developed, they sang sometimes in unison and often in complicated harmonies.  Even if we did not understand the words, the sound was deeply moving and the audience loved it.


I asked the taxi driver who took us back, ‘Combien?’


He was no fool; I must have paid him about three times the usual fare. 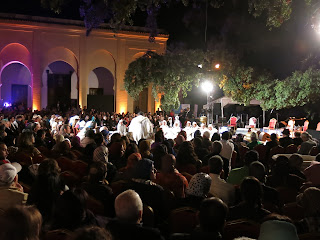