600 miles North of Moscow is the .  In this sea, a huge inlet in 's arctic north coast, lie the .  They were remote enough in distance, access and people's consciousness to be the place for Stalin's first Gulag.  These islands have always been a place for mystics, dissidents, and heretics.


In the archipelago, I walked on the uninhabited .  Isolated and dark for a quarter of the year it may be, but people once lived here.  Before even the Sami hunter-gatherers, people of the Stone Age came here and laid down 13 stone labyrinths.  Locally, people call them Babylons though they were already ancient when that city was built.  They are simple double-spiral paths between low rocks, set into the heather.


People with no more than flints and furs came here.  They were people like us; they were spiritual and imaginative.  They told stories.  The original purpose of the labyrinths is uncertain.  Some guess that they were portals to the underworld, made labyrinthine to prevent evil spirits finding their way to the surface.


Under a clear, cold sky, I walked one of the labyrinths, slowly curling in to the centre of the maze and into my own thoughts.  At the centre, the path wound out again interlaced between the inbound lanes.  It would have been easy to find an altered state of consciousness here.


I sensed something universal and timeless, but elusive.  There is a labyrinth in the cathedral at .  Rock paintings in show the same design.  Some lost idea connects all these labyrinths through time and place.  Labyrinths must have led our ancestors to a place that we have forgotten how to find. 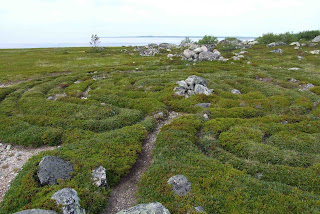