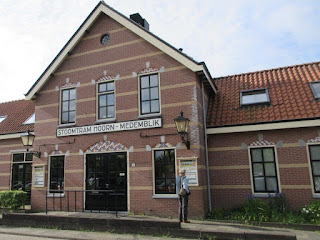 Photo Kevin Hoggett
A fat, dense, little book sits in my hand.  It has a scarlet bookmark ribbon.  The cover shows a simple woodblock picture in red on a pale background.  The picture is of old man in traditional Dutch fisherman’s clothes, smoking a pipe. There is a Dutch barge and a windmill in the background.  The fisherman is, himself, holding a copy of the little book and so the picture is an infinite regression. Later, I learn that this is called the Droste effect after a 1904 advertisement for a brand of Dutch cocoa. There is something very pleasing about the look and heft of this book. 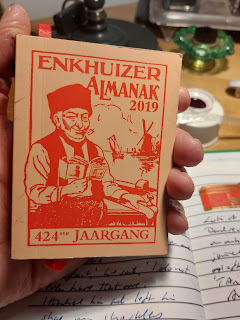 I am in the railway station at in the .  I shall shortly depart by steam train to Medemblik, from where I shall travel by the vintage motor ship Friesland to the small town of .

In the station souvenir shop, the book is on sale for just one Euro.  I can see why; the book’s title is Enkhuizer Almanak 2019 and it is three years out of date but it has something to do with Enkhuizen. I happily part with a Euro.  On the train, I settle down to explore my new purchase.  It has 288 pages all in Dutch so it is going to take some enjoyable effort to work it all out.

I quickly recognise tide tables for , , Tershchelling, and ; names that take my mind to shipping forecasts, ferry timetables and small craft warfare in World War 2.

There is a heavy-handed joke about Facebook on page 200 which is not improved by Google translate and on page 150, a sketch of rather a cheeky mermaid. 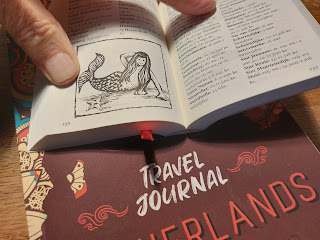 There is something else on the cover: “424ste Jaargang” which must mean 424th annual edition; this book has history.  It may have first been published in 1595 when Queen Elizabeth I was on the throne of and Sir Francis Drake set off on his final voyage. In , the first Dutch expedition to the set off.  I later learn that the oldest surviving copy of the Enkhuizer Almanak was printed in the town in 1680.  What a splendid and remarkable achievement it is to keep this small book in publication for so long. I continue to explore and find the dates for the sheep market in Oldebrook and the Pentecost market in Brummen Easte, events I didn’t know I had missed.  One of many household hints tells me that candles last longer if they have been put in the freezer before use.  I can even check on the regulations for the flying of flags. What a store of esoteric knowledge.

I have arrived in Enkhuizen, a charming small port with canals.  My wife Adrienne is lost in a haze of fantasy house buying.  She tells me she wants to retire to Enkhuizen.  I fear that I am not included and that she plans to retire from being my wife. 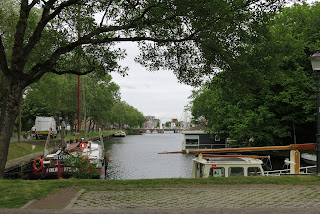 The Almanak has its own museum.  It is the old cold store for the fish market.  It is small like the Almanak and closed on the day of my visit but I discover that there is a website, which I shall explore later.  In the meantime, we enjoy dinner in Schipperscafe ‘t Ankertje (Skippers’ Pub at the Little Anchor). 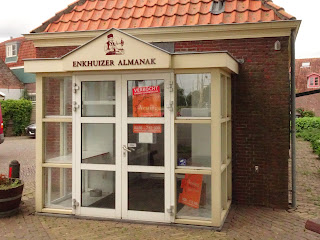 When I get home, I open up the website.  The Almanak has its own weather forecasting system, supported by its own corps of weather observers.  It works on the principal of reversal days that divide weather into decades of 10 days about which weather changes.  I would tell you more but the full explanation is in Dutch.

I still keep the Enkhuizer Almanak on my desk more as a paperweight than a reference resource.  I just like it.