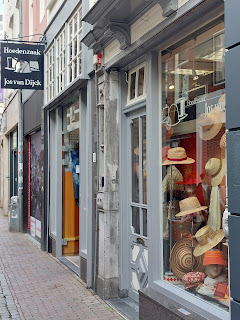 Unusually, I had not planned our visit to so I did not know what I might find.  I certainly did not expect to find a very fine hatter or, in Dutch, Hoedenzaak.  It was the establishment of Mr Jos van Dijck and Mr van Dijck knows the business of hatting.  Above his shop, at number 12 Bakkerstraat, was an elegant, metal, cutout sign showing the name of his business and three classic hats. His brightly lit window displayed a cascade of fine hats for both men and women. 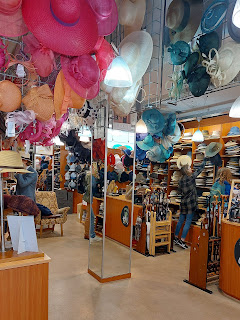 Of course I did not need to buy a hat so we went in just for a look. Mr van Dijck was busy with a customer, a young man of fastidious fashion sense who was taking a long time to decide between two Panama hats.  One was a classic Panama and the other had a chequered pattern.  The latter was the sort of hat at which, had Bertie Wooster tried it on, Jeeves would have raised an eyebrow.  I thought better of stepping in to give advice even though I feel I know a bit about Panama hats. See my article: The Panama Hat Story

Still determined not to buy, I now had time to look around.  There were a lot of hats.  There was not much in the way of millinery.  The women's’ hats were classic and unfussy.  The Queen could find a hat here.  It was, thanks be, no place to buy a fascinator,  For both men and women there were Panamas, trilbies, fedoras, boaters and bowlers, caps and cloches, in all fabrics and colours.  However you walked into that shop, you could walk out in style.

My eye fell upon a natty paperboy cap in woven sea grass. Its open weave would be cool in summer.  I tried it on — too small.  Noticing my interest, Mr van Dijck left the young man still with a hat in each hand to attend to me.  He agreed it was too small.

‘Too much brain,’ he said, recycling a joke as old and threadbare as a well-loved flat cap.

He was not sure if he had it in a bigger size.  He went downstairs to look but came back shaking his head.  He checked that the young man had not yet made a decision and sat down at his computer and tapped at the keys for about a minute, his face glum.

‘Sorry, I don’t have a bigger one in stock.  It seems I do not even have that one.’

I was travelling with the excellent PTG Tours