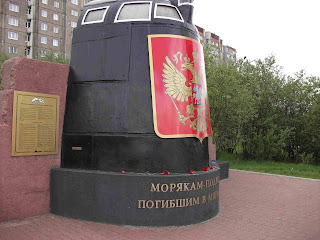 Way back in 2012, I visited in the far North of Russia.  The Russian submarine , you may remember, suffered a catastrophic explosion in August 2000 and sank with all hands.  I went to the Museum of the Russian Northern Fleet to pay my respects to our old adversary.  There was an outdoor memorial to the men who lost their lives constructed from the recovered bridge fin of the submarine.

There were other exhibits inside.  Not all of the crew died immediately.  A small group survived for a time in the after compartment of the boat.  I spent quite some time gazing at the very note on which they had written their names in the darkness.

The note stayed with me and I have written a very short (101 words) story about it.  The story has been published online and here is the link. Kursk