A Lost Empire on the Island of Folegandros 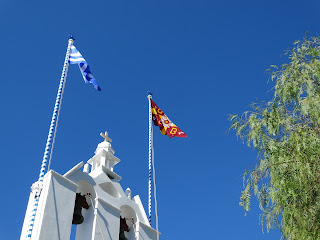 The tiny town , capital of the Greek Island Folegandros is everything it should be.  White houses with blue, almost indigo, doors and windows surround the square. In the centre are the chairs and tables of a café under the shade of fig and hibiscus trees.  Cutlery clinks: people chatter.

It is the feast day of the Holy Cross and the church that takes up one side of the square is flying two flags, bright against an azure sky.  One, the Greek flag, reflects in its stripes, the blue and white of the houses.  The other flag has an intricate design in maroon and yellow.  It is the flag of the .  What a model for taking a long and optimistic view of history.  The fell over half a millennium ago. Sultan Mehmed II, leading the forces of the Ottoman Empire sacked after a 53-day siege on 29th May 1453. 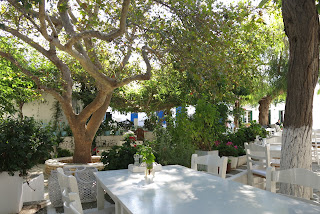