The Power of Myth 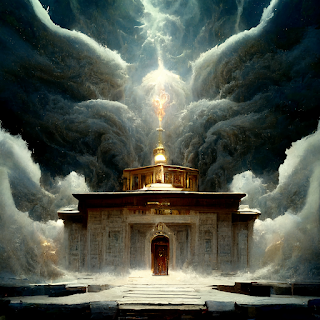 “His head and his hairs were white like wool, as white as snow; and his eyes were as a flame of fire;” Revelation 1:14

In about 95 AD in a cave on the Greek of , , the beloved disciple of Jesus of Nazareth, by then an old man saw a revelation sent to him through a three-legged crack in the rock ceiling of the cave that was his home. He dictated what he saw to his servant, who wrote down what is now the last book in the Christian Bible, the Book of Revelation. In September 2022, I was standing in that very cave.

Everything in that paragraph is untrue.

It was in the 11th Century that the cave in which I was standing was discovered and identified as the cave in which the revelation of occurred.  The 11th Century was not a time noted for the forensic rigour of its archaeology. The Book of Revelation does of course exist.  It was the last chapter to be added to the canon of Christian literature and not until the 4th Century AD, reflecting some doubts about its authenticity held by the early church bishops.  The Book of Revelation does identify “John” as its author but no one knows which John.  There is nothing to suggest that the vision reached the Saint through a three-pronged crack in the ceiling. So, while I was standing in a cave, any cave would have done.

Nor can anyone demonstrate that the vision was sent to the old saint by God rather than being a chimera emanating from the mind of a senile old man.

Standing in the chapel that has been set up in the cave, I could see the famous fissure in the ceiling and see the rock, on which, it is claimed, John laid his head.

My left brain was hard at work; it’s all rubbish, I thought.

I had arrived early. Embarrassingly, I walked into the tiny chapel while a Greek Orthodox mass was coming to its end. The light of a few candles, reflected from the burnished gold of ancient icons, cast the cave into amber light and dark shadows.  I breathed in air infused with incense. The deep baritone voice of a priest, chanting in Greek, and echoing from every bend in the rock, filled the air with ethereal sound. The priest, himself, was dressed in long white robes and a wide gold belt, over which he wore a surplice of white cotton, soft as gauze and decorated with tiny, brightly coloured embroidered flowers.  When he turned, he revealed fiery eyes and a long beard, white like wool, as white as snow.

‘That’s what God must look like,” came the awed whisper from my wife. She really is the World’s least convincing atheist.

My right brain asserted itself.  I was in a place that had been the object of sincere faith and veneration for more than a thousand years. That can get to you and it did. I had not been convinced but I had been profoundly moved.