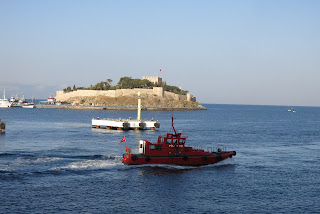 On board the MS Monet at September 2022

On the opposite side of the quay from our modestly sized ship was a giant cruise liner. While we were waiting to depart for a trip to the never-ending line of tourists leaving the cruise ship gave me an opportunity for people watching.

Somewhat apart from the general run of people walking along the quay was an elderly lady. She was lavishly made-up and dressed in an immaculately pressed white shorts-suit. I imagined her to be the widow of a successful American automobile dealer, at whose demise, her hair had turned quite gold with grief. (Thanks for the line, Mr Wilde). She toddled along the jetty, her back bent, towing a wheelie suitcase. I was intrigued but thought no more of her until much later in the day when she and we returned to our ships at the same time.  There she was, transformed. She had a new hair band that matched a royal blue chiffon ballgown all in flounces and frills. It was now clear that her suitcase had contained this change of clothes.

This time, she was in a wheelchair pushed by a muscular young gentleman dressed in the livery of a porter of some grand hotel. She stood up and parted from her new friend with a fulsome and tearful embrace.  I feel sure she had spent her time ashore well but exactly how she did must remain a mystery.